With the bells of the midnight clock eliciting shouts of joy at the newfound independence India and Pakistan had gained after 200 years under British rule, sounds of triumph and celebration would soon be swallowed by blood curdling cries that lamented the suffering that came from the hope of freedom.

It comes as no surprise that the Partition holds a monumental significance in South Asia, however, it is much less recognised that this historical event is deeply embedded into the history and legacy of Britain. A gaping abyss seems to shroud the memory of the part Britain played in what came to be one of the deadliest mass migrations in history, and this is largely in part to the omission of Britain's colonial legacy in the UK's national curriculum.

Following mounting unrest that manifested in anti-colonial movements during the 20th century, where India's fight for Independence from British rule and dwindling resources as a result of the Second World War, Britain could no longer maintain its control over India. And so, in 1947, the British would conclude two centuries of colonial rule in a far from hushed and peaceful departure.

The British viceroy announced that the subcontinent was to be divided into two independent nations determined along religious lines: Hindu majority India and Muslim majority Pakistan. And although a year was granted to execute this mammoth task that would determine the course of life and future of millions of citizens, a mere 5 weeks was deemed enough.

Guided by underfed knowledge of the land, outdated maps, and a rudimentary understanding of the rich culture and customs of India, 26-year-old Cyril Radcliffe, would be appointed to carve lines into a subcontinent he had never visited before. And overnight, hundreds of thousands of people would wake up as strangers in what had always been home, scrambling away from what had now become the wrong side of the newly engineered nations, and ripped away from the ones they loved.

While, of course, it is a difficult conversation to be had, it is a truth that must be told. Not only for the purpose of giving much needed visibility to the lives and stories of the vast number of South Asians that play a crucial part in sustaining the modern Britain we see today, but also for giving the younger generation of British South Asians the support and resources to trace their ancestral footsteps. As we mark the 75th anniversary of Partition, we must acknowledge that the onus to keep the stories of Partition alive in the minds of young people has often fallen entirely upon South Asian households, and the generation that holds first hand memories and accounts of the tragedies unleashed upon millions of people will soon be lost to time. And so, if we don't begin to teach these histories within the educational system, young people's awareness and understanding of such a significant portion of their history will teeter on the brink of decline.

Within most secondary schools in England, the majority of historical events taught to students are Eurocentric. It is essential that if we are to offer pupils an honest account of UK history, we should not censor its colonial legacy, for this not only constructed Britain's past, but still continues to shape its future. In this way, pupils can begin to better understand the long-standing historical and cultural connections they share which, in turn, promotes unity and cohesion amongst peers. Further to this, an educational experience that grants pupils the opportunity to discover a more complete account of history, promotes empathetic perspectives and an increased level of understanding that help dispel prejudice and racial discrimination.

Awareness to the importance of bringing South Asian History, particularly with emphasis on chronicling Britain's departure from India in 1947 and the aftermath of Partition, into the UK's curriculum is picking up momentum in the media. This is thanks to organisations such as Partition Education Group, who have compiled for teachers a plethora of reading and educational materials which are tailored to the varying learning objectives pupils are required to meet depending on their stage of education.

It's through important work like this that change and progress begin to be made. We can see this already happening, as this September, Wales will become the first UK nation to make the teaching of Black, Asian, minority ethnic histories mandatory in the curriculum.


It may be unbeknown to you, but there's an important role you play in amplifying South Asian history.

Through immersing yourself in events promoted by culture and art organisations, or even sharing your own experiences, there's so much you can do to learn, engage, and empower! 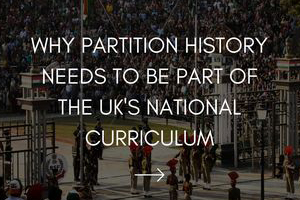