At the eleventh hour, on the eleventh day, of the eleventh month, silence descends upon the nation. Bringing with it a melancholy weight that plunges the United Kingdom and many of her commonwealth countries into a deep state of reflection, homage is paid to the heroic men and women that would shield the country from the rampages of war with their lives. But, tragically, for many Indian soldiers, the memory of their legacy and bravery has remained largely buried in the past. That is until recently.

The discovery of heart-wrenching letters written by Indian soldiers, diary entries, and fading remnants of Punjabi folk songs that in the distant past would fill the air of rural villages in India, have preserved the experiences and emotions felt by sepoys fighting the Great War. Through this, we are granted the once unimaginable possibility to see life in the trenches from their eyes.

When traversing through this rich assortment of history, it is fascinating to discover that the mention of music is habitually found. It seems to serve as a staunch indicator of just how pivotal a role song and rhythm would play in sustaining the spirit, moral, and comfort of Indian soldiers.

One such reminder was in a chance encounter with a photograph taken over 100 years ago. Capturing the scene of Sikh soldiers playing devotional music amid the humble settings of a French barn, this image would inspire SAA-uk to embark upon the archaeological quest of recovering these hidden stories.

Rigorously digging through archives in hopes to find treasured relics from this distant past, the search had been successful. Forgotten pictures, letters, and memories that escaped both the eroding hands of time and histories long neglect were pieced together and presented in the 2017 production, Sacred Sounds. Weaving together heart-wrenching poetry, spoken word, and carefully selected Shabads, an immersive journey through time was created, one that resurrected the emotions of hope, courage, and despair that would have surely rained down like the unrelenting monsoon on the soldiers.
Cross-legged and unassuming, little would the Sikh soldiers know that this candid moment where the dholki drum replaced the weaponry and the sacred chants of prayer would soothe their strained throats fatigued by the incessant screeches of war would forever be immortalised.

In another memento which takes the form of a letter dated back to 1916, the desperation with which music was sought and the sustaining power it generated leaves no room for doubt.

"Although there is danger ahead, our whole force remains as happy as if it were celebrating a wedding. Right into the trenches there are various kinds of music and songs are sung... Do not be anxious about us, we are quite happy"

Despite the onslaught of explosions, the tidal waves of shells, and the bitter cold clawing its way into the skin of soldier's worlds away from the warmth of sun they knew so well at home, music is shown to hold a mystical power. It transformed the bleak reality that stared in the face of the soldiers into a blissful haven, even if just temporarily. And digging deeper, the alluded feast of world music that soldiers would have brought the sounds of their native countries to gives a wonderful insight into just how cultural exchange would have taken place.

In the echoes of The First World War's famous anthem, It's a Long Way to Tipperary, lies the treasured memory of how music was used as a bridge across language and cultural barriers to bring British and Indian soldiers together in friendship, mind and spirit. And upon reading a diary entry written by Alexander MacGregor, a British officer serving with the Indian army, we are offered a rare insight into how this breath-taking scene would look.

27 January 1915: Some time ago there was a big sing song at Fort Tanskyne, and one of the men brought down the house completely by getting up and singing in a regular shrill native chant “Tipperary” in Hindustani.

The way that the trading of culture and the interchange of language brought solace, morale, and joy to the troops from East and West serves as a timeless reminder of how these celebrations of differences would help the allies of WW1 march to victory.

So, In the still of the 2 minute silence and in each poppy we wear, let's remember to honour the stories of the forgotten soldiers of World War 1 and 2 so that their lives and legacies aren't lost in the dark abyss of the past.


It may be unbeknown to you, but there's an important role you play in amplifying South Asian history.

Through immersing yourself in events promoted by culture and art organisations, or even sharing your own experiences, there's so much you can do to learn, engage, and empower! 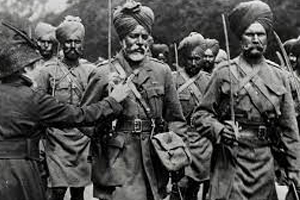